On Tuesday 28th October the BBC ran a special day of events celebrating the achievements of inspirational women. You might have seen us joining in, by tweeting about our own University of Sheffield women who are #BustingStereotypes. Today we have a post about a young family who are also #BustingStereotypes in the way they've decided to divide up childcare - and what that means for their careers.

It's a well-known fact that studying for a PhD requires hard work, commitment, dedication and the drive to succeed. It's also a well-known fact that being a mother is difficult - sleepless nights, nappy changes and the challenges of parenting all take their toll. A lot has been written about the challenges of balancing an academic career and parenthood - but what about those who become parents while they're still studying? 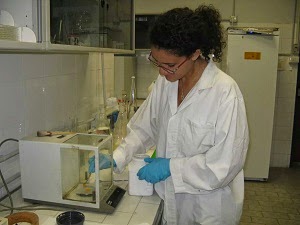 Sebastiana, who studied Industrial Chemistry and Chemical Engineering undergraduate and masters degrees at the University of Catania (Sicily) before moving to Sheffield with her Italian husband earlier this year, is in the first year of her PhD in Synthetic Ecology - and also in her first year of bringing up a young daughter. We caught up with her in the Mappin Café to find out about the challenges of bringing up a family, overcoming stereotypes and why some of the same skills are needed in both engineering and parenting.

Sebastiana decided to become an engineer after being inspired by her husband and sisters, who both have engineering degrees. "In Italy, being an engineer is prestigious - it's a title, like 'Doctor', people might refer to you as Engineer. It means you have a good education and good skills. There is some dirty work, but fundamentally it's a top position." Having studied Chemistry, she realised that engineering has a more practical focus, working on solving real-world problems, and this is what attracted her. It wasn't an easy choice - in Italy only two out of twenty people studying her course were female, and she acknowledges that it was harder for her than others. "As a woman in science, I had to work to be better than everybody else - not only academically, but I had to work harder to prove myself, because I am a woman. Some of my professors had old-fashioned views about things."

Sebastiana was six months pregnant by the end of her Masters degree, and she knew she wanted to carry on with a PhD at Sheffield. Although her parents were extremely supportive of her career choices, that wasn't the case for everybody in her life. "In Sicily, where I come from, there is still this perception - why do you need to work? Your husband has a job! You're expected to stop working when you have a baby," she says. "But I was very clear with my husband from the start - this is what I want to do. He supports me in that."

So, in the last weeks of her pregnancy, she prepared and submitted her research proposal, choosing Sheffield because of its place in international university rankings and the research interests of her supervisor. Just one week after she gave birth to her daughter, she was interviewed - and offered a place. She and her family made the move to Sheffield earlier this year. Now, she spends her days in the lab, while her husband looks after their daughter. "I didn't want to put my career on hold because I had had a baby - I felt like I'd miss opportunities. My husband doesn't speak much English - when the baby is a little older he can go to English classes - so this was the best choice."

"In Sicily this would be really unusual. But studying for my PhD, that's my 'me time'!" she laughs.

How does she balance her responsibilities? "I come into work early, take just a 30 minute lunch break, and focus on what I have to do while I'm here. My husband looks after the baby in the day and when I'm home in the evening that's my time for my husband and my family - though I do sometimes work at the weekend, if the baby is asleep. The supervisor is important - PhD students can feel isolated because there's just you and the research. But my supervisor is really supportive. When I said I had a baby, he said "that's great!" He treats me just like he treats everybody else. In the future I want to move into a post-doctoral position and carry on researching."

Would Sebastiana encourage other women to follow a career in engineering? "I don't think we should distinguish between men and women," she says. "It should be about whether you have the skills and the capacity. But I think females can be better than males! Women don't fear challenges and problems and can deal with a lot of things - we are multi-taskers. You need all these skills as an engineer."

Would she want her daughter to be an engineer? "She might have different aspirations. Both her parents are engineers, so no pressure! I want her to know that she has options and can choose - she can be whatever she wants to be."


Finally, I ask Sebastiana whether having a baby and studying engineering means that she still has to be better than everybody else - do people doubt her commitment to her role? Does she still have to prove herself all the time? "I still work hard, but because I want to work hard and do well, because I want the University to be proud of me like I am of belonging to it...not because people doubt my value. But being both a mum and an engineer doesn't make me that unusual. When you are motivated and you have one true dream, you find inside you the strength to do what you want to do."
Posted by Unknown at 15:55 2 comments:

If you've been following us for a while, it will come as no surprise that the University of Sheffield's Faculty of Engineering has plenty of inspirational female role-models. So we're delighted that one of our own has been nominated in the 2014 WISE Awards! Professor Elena Rodriguez-Falcon, Professor of Enterprise and Engineering Education, Director of Enterprise Education in the University of Sheffield, Faculty Director of Communications and External Relations, and (last but certainly not least!) former Faculty Director for Women in Engineering, has been shortlisted for the 2014 WISE Champion Award.

WISE (or Women into Science, Engineering and Construction) works to inspire girls to choose science, technology, engineering and mathematics pathways and has the target of increasing the number of girls in the STEM workforce to 30% by 2020. The WISE Awards is an annual event which recognises and celebrates the achievements of individuals and organisations which are actively working towards WISE's goals. For her work in encouraging the recruitment, retention and progression of women in STEM subjects, Elena has been nominated as "an individual champion who has used their position to influence others to take positive action to promote female talent in STEM, within their own organisation or beyond." Elena was tasked with setting up the Women in Engineering project at Sheffield and led the initiative for three years.


The award ceremony will take place on Thursday 13 November at the Grange Hotel, Tower Bridge, London, and we'll keep you up to date with the winners. Congratulations, Elena!

Latest stories from around the web: sourced by the Women in Engineering Student Society